Obama Claims Muslims Built ‘The Very Fabric of Our Nation’

This past Sunday (7-27-14), President Obama and First Lady Michelle released a statement thanking Muslim Americans for their many “achievements and contributions… and for building the very fabric of our nation and strengthening the core of our democracy.”

The comments were made to mark the celebration of Eid-al-Fitr, a time of spiritual renewal for Muslims which comes at the end of the month-long fast of Ramadan. The Obamas said in their statement that Eid “celebrates the common values that unite us in our humanity” and “welcomed their commitment to giving back to their communities.” The International Business Times reports that during Eid, Muslims join in Islamic prayer, while saying “Allahu Akbar,” or “Allah is greater”, and feasting.

* Many Muslims and their apologists claim “Allahu Akbar” is simply the Arabic translation of a common English phrase meaning “God is great!”  But the actual translation of Allahu Akbar is “Allah is greater” [than God].

Muslims Built ‘The Very Fabric of Our Nation?

Have you ever seen a Muslim hospital?

Have you heard a Muslim orchestra?

Have you seen a Muslim band march in a parade?

Have you witnessed a Muslim charity?

Have you shaken hands with a Muslim Girl Scout?

Have you seen a Muslim Candy Striper?

The answer is no, you have not. Just ask yourself WHY?

Were those Muslims that celebrated the first Thanksgiving day? Sorry, those were Pilgrims and Native American Indians.

Can you show me one Muslim signature on the: United States Constitution, the Declaration of Independence or the Bill of Rights? I didn’t think so.

Did Muslims fight for this country’s freedom from England? No.

Did Muslims fight to free the slaves in America? No, they did not.

In fact, Muslims to this day are still the largest traffickers in human slavery. Your own half-brother, a devout Muslim, still advocates slavery himself, even though Muslims of Arabic descent refer to black Muslims as “pug nosed slaves.” Says a lot of what the Muslim world really thinks of your family’s “rich Islamic heritage,” doesn’t it Mr. Obama?

Where were Muslims during the Civil Rights era of this country? Not present.

There are no pictures or media accounts of Muslims walking side by side with Martin Luther King, Jr. or helping to advance the cause of Civil Rights.

Where were Muslims during this country’s Woman’s Suffrage era? Again, not present. In fact, devout Muslims demand that women are subservient to men in the Islamic culture. So much so, that often they are beaten for not wearing the ‘hajib’ or for talking to a man who is not a direct family member or their husband. Yep, the Muslims are all for women’s rights, aren’t they?

Where were Muslims during World War II? They were aligned with Adolf Hitler. The Muslim grand mufti himself met with Adolf Hitler, reviewed the troops and accepted support from the Nazi’s in killing Jews. 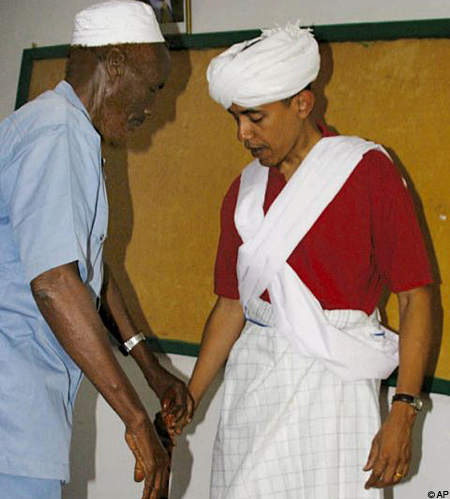