The Ban On Cash is Ramping Up

You can’t control the global economy until you first ban cash.

That no man might buy or sell, save he that had the mark or the name of the beast or the number of his name. Revelation 13:17

Last week, we were dismayed – although not entirely surprised – to learn that Germany’s Social Democrats have proposed a €5,000 limit on cash transactions and the elimination of the €500 note.

The rationale: if you’re paying in cash for something that costs more than €5,000, you’re probably a terrorist or a “foreign criminal.”

Of course that’s nonsense but it’s a reflection of a changing world.

It would actually take some effort to imagine a more obvious, naked attempt at fear mongering.  Cash – in daily use for centuries if not millennia – is now, suddenly, the agent of spring-loaded, instant death? And we’re supposed to just accept that line?

No individual in their right mind is going to take anything but cash for a vehicle, boat, or anything valuable. You can easily forge a certified check or simply stop payment on it after you get your goodies.

Angela Merkel’s junior coalition partners are hardly the first officials to suggest that cash should be phased out. In fact, the “ban cash” calls have been getting louder for at least a year as every leftist from Citi’s Willem Buiter to economist Ken Rogoff to Norway’s largest bank to Bloomberg’s editorial staff demands the abolition of the barbarous paper fiat relic that serves as a check on central bankers’ ability to go “full Krugman.”

The most disturbing development we have seen yet in the push for a cashless society has come from the following slide in a Morgan Stanley presentation, one in which the bank’s head of EMEA equity research Huw van Steenis, pointed out the following… 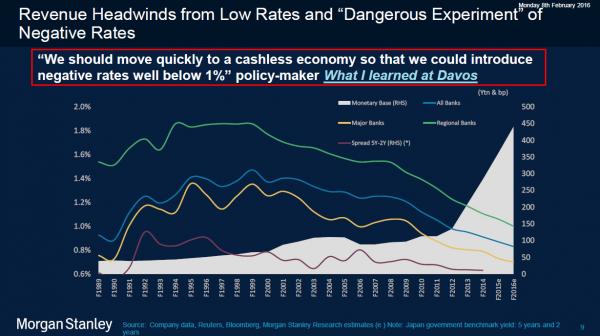 Cash – as worthless as it may ultimately be – does serve a purpose.

It’s a check on leftist, socialist, Keynesian insanity in that it sets a very real lower bound on interest rates. If rates are too punitive (that is, if they’re too negative), savers will simply pull their cash out of the bank and put it under the mattress. That’s inconvenient for policy makers who have been thus far unable to resuscitate global growth and trade.

Put simply: if you ban cash, you can centrally plan and take control of the the entire economy by forcing people to spend. You either spend it, on what we make you spend it on, or watch as deeply negative rates eat away at your savings.

Cash would allow people to escape from the one thing that could save their larcenous currency system: negative interest rates.

To make this clear, I like to paraphrase a famous (and good) quote from Alan Greenspan, back from 1966, during his Ayn Randian days: The financial policy of the welfare state requires that there be no way for the owners of wealth to protect themselves.

That was a true statement, and with a slight modification, it succinctly explains the new war on cash:

The preservation of an insolvent currency system requires that the owners of currency have no way to protect it.

Cash is currency that you hold in your own hands, that stands more or less alone. It is primarily external to bank control. Electronic money – bank balances, credit, etc. – remains inside the banking system and fully subject to bank control.

A combination of no cash and negative interest rates would be a quiet, permanent version of what was done in Cyprus, where the government simply shut down everything, allowed only the smallest deductions via ATMs, and then stole money from thousands of bank accounts at once.

The Cypriot spectacle was fairly large, however, and that tends to undermine the legitimacy of rulership. So, it is much better to have no ATMs and no cash at all. There would be no lines of angry people talking to each other, only isolated losers with no recourse, licking their wounds while the talking heads on television tell them to stay calm and watch the flashing images.

Negative interest rates would give the banks 100% control over your purchases. They could, even in the worst pinch, allow you to purchase food while freezing the rest of your money. The average person would have no recourse and would simply be robbed… but very smoothly and with no human face to blame on.

Negative interest rates mean that your bank account shrinks day by day, automatically. Your $1000 in January becomes $950 by December. And where does that money go? To the banks, of course, and to the government. They syphon your money away, drip by drip, and there’s nothing you can do about it. This accomplishes several things for them at once:

It finances government, limitlessly and automatically. Forget tax filings; they can just take as they please.

It pays off the bad debt of the big banks. (And there are oceans of debt.)

It forces you to spend everything you’ve got, as soon as you get it. (Otherwise it will shrink.)

It gives the system full control over your financial life. Everything is monitored, everything is tracked, and every single transaction must be approved by them (or not). If they decide they don’t like you, you’re instantly reduced to begging.

In short, this is a direct return to serfdom.

Of course policy makers and the influential left leaning economists who inform their decisions won’t tell you that. They’ll say it’s all an effort to fight crime. On Monday we get the latest cash ban call, this time from Peter Sands, the former chief executive officer of Standard Chartered who’s now an academic at Harvard Kennedy School. “High denomination banknotes such as the 500-euro ($556) note and the $100 bill should be eliminated to make it harder for criminals, terrorists, tax evaders and corrupt officials to transfer funds,” Bloomberg writes, referencing a new paper by Sands entitled “Making it Harder for the Bad Guys.”

Here’s what Sands has to say about high-denomination bank notes:

“High-value notes are the preferred payment mechanism of those pursuing illicit activities, given the anonymity and lack of transaction record they offer, and the relative ease with which they can be transported and moved. They play little role in the functioning of the legitimate economy, yet a crucial role in the underground economy. The irony is that they are provided to criminals by the state.”

So there you go. The latest in a string of verbal attacks on the only thing that stands between central bankers and hugely negative rates. First it will be 100s that are banned, then 50s, then 20s, and so on until individuals’ economic autonomy is completely stripped away and make no mistake, it has very little to do with fighting “terrorism” and “crime” and quite a bit to do with giving officials the leeway to conduct still more moneatry policy experiments.

After all, the Kurodas and Draghis of the world are very nearly out of options. When everything that can be monetized without completely breaking markets has been monetized, and when rates become negative enough that banks can no longer avoid passing the cost on to depositors, it’s either admit that post-crisis policies have failed, or go digital.