Remember when Obama promised to reduce your healthcare by $2,500 per year?

“If you already have healthcare, I will work with your employer to lower your premiums by $2,500 per year.” Barack Obama, 2008

How’s that working out? 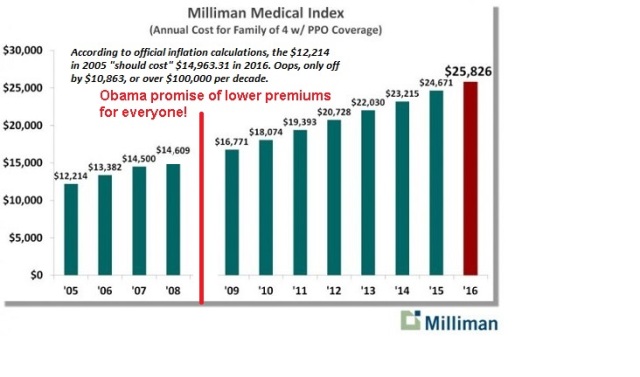 Obamacare is a disaster. It’s a poisoned blade in the heart of the economy. Everybody knows this, just as everybody knows it’s unaffordable and unsustainable.

The solution? Let a 100 flowers bloom. Give consumers as wide a choice as possible, including government-run insurance programs. Don’t force anyone to join anything. Give employers and employees as broad a range of choices as possible–yes, including a government-run insurance program in which the government owns the entire operation–clinics, hospitals, drug manufacturers, etc., lock, stock and barrel.  Let them compete too.

The point here is we need real competition, but our current system guarantees there cannot be real competition. The for-profit cartels have captured the federal regulatory and funding agencies, and the last thing the cartels want is transparency and wide-open global competition and Obamacare has only made this worse, not better.