Justice Ruth Bader Ginsburg has canceled a public appearance scheduled for January 29 after missing two weeks of oral arguments at the Supreme Court.

Tuesday evening the Skirball Center announced the cancellation of :

While her real condition is unknown, “top cancer surgeons” told CNBC they expect the 85-year-old Justice to be back on the bench in less than six weeks after fracturing three ribs and undergoing surgery to remove two cancerous nodules from her left lung over a two-month span.

Ginsburg’s January 29 appearance was announced on December 20 – one day before her lung surgery. She was released from the hospital four days later. On January 7, Chief Justice John Roberts said Ginsburg was “unable to be present today,” adding that she would still participate from home. A court spokesperson said earlier that day that Ginsburg would participate in cases “on the basis of briefs, filings and transcripts”, but there has been no confirmed participation from Ginsburg on anything yet.

Ginsburg’s absence from the bench – and now her late-January event cancellation, has stoked rumors over social media that the oldest Supreme Court Justice is actually dead, with doubters demanding proof-of-life under hashtags such as #WeekendAtRuths, a reference to the popular 1989 film Weekend At Bernie’s. 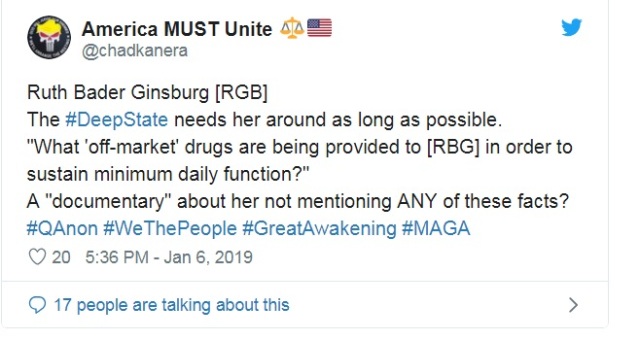 That said, a 1 second clip of a video purporting to be Ginsburg emerging from her Washington D.C. apartment was reported by TMZ and is the only known proof of her existence.

This wasn’t enough to satisfy some critics who pointed to the fact that you can’t see her face in the video, as noted by the Daily Dot’s Mike Rothschild.

And after the way the media covered up Hillary’s poor health, who can blame them?

Whatever Ginsburg’s current status, the prognosis for an 85-year-old who recently had two cancerous growths removed, and who has previously battled both pancreatic and colon cancer, can’t be good. The only question; will she survive Trump?